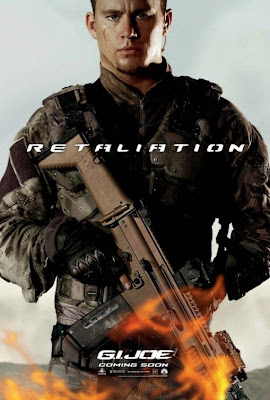 Stormshadow: It is possible to feel so much hate you don’t feel it at all, like a fish surrounded by water.

When I reviewed the original G.I. JOE film, THE RISE OF COBRA, I actually received rather menacing messages from regular readers who had seen it based on my recommendation that it was mindless fun. They felt somehow that I had abused their trust because they genuinely felt it was pure trash and not worth watching at all. I have since seen it again and still feel the same as I did then. It is not a good movie; I’m not saying it is. It is a cartoonish explosion of exaggerated charicature, melodramatic backstory and silly one-liners. For me, it was laughable but still enjoyable. This time around, in G.I. JOE: RETALIATION, new director, Jon M. Chu, has taken the Joe’s in a more serious direction, trying to give them a more authentic air that is supposed to be more closely linked to the original source material. In doing so though, he also robbed the franchise of almost all of its fun.

G.I. JOE: RETALIATION does everything it can to distance itself from THE RISE OF COBRA within the first half hour of the film. Let alone that there is no explanation as to where most of the characters from the first film have disappeared to, the few characters that did make it to the sequel are mostly killed off in the first half hour. This act of retaliation is meant to galvanize what little Joe’s remain to take down their aggressors, which are of course, Cobra, a terrorist cell bent on world domination. What it really does is leave us with a just few boring leftover Joe’s who are tasked with saving the entire world. They might seem outmatched but there only seem to be a few Cobra members anyway so they should be just fine. And you would think that if the film chooses to only focus on a few of the characters fans have loved for ages, those characters would actually have some personality. Aside from The Rock, who is perfectly cast because his neck, arms and chest resemble the physique of an action figure, other players, like Lady Jaye (Adrianne Policki) and Flint (D.J. Cotrona), might as well be just as faceless as the rest of the cast, given they bring nothing in terms of personality. Bruce Willis even makes an appearance as the original Joe, General Joe Colton, but blink and you’ll miss him entirely. 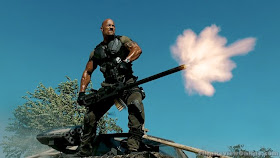 Chu’s previous films, the last three STEP UP movies, and the Justin Bieber documentary, NEVER SAY NEVER, were not about character either; they were about the dance or the show. G.I. JOE: RETALIATION barely even has the show though. And without the flashy action scenes, save for one thrilling mountainside ninja extravaganza, all you’re left to focus on are the holes in the storyline and the lack of passion in the majority of the performances. Sure the re-imagined backstories in the first film felt forced and unnecessary but without them, Chu gives us no reason to care about this new batch of Joe’s. There also doesn’t seem to be much in terms of a master plan on Cobra’s part either so we’re just left to bumble along to some unclear climax in the company of a bunch of forgettable faces. So far, we are now two attempts at successfully bringing G.I. JOE to the big screen and I am still nowhere near ready to yell, “Yo Joe!”